France, 1714: in a moment of desperation, a young woman makes a Faustian bargain to live forever and is cursed to be forgotten by everyone she meets. Thus begins the extraordinary life of Addie LaRue, and a dazzling adventure that will play out across centuries and continents, across history and art, as a young woman learns how far she will go to leave her mark on the world. But everything changes when, after nearly 300 years, Addie stumbles across a young man in a hidden bookstore and he remembers her name.

In 1893, there’s no such thing as witches. There used to be, in the wild, dark days before the burnings began, but now witching is nothing but tidy charms and nursery rhymes. If the modern woman wants any measure of power, she must find it at the ballot box.

But when the Eastwood sisters–James Juniper, Agnes Amaranth, and Beatrice Belladonna–join the suffragists of New Salem, they begin to pursue the forgotten words and ways that might turn the women’s movement into the witch’s movement. Stalked by shadows and sickness, hunted by forces who will not suffer a witch to vote-and perhaps not even to live-the sisters will need to delve into the oldest magics, draw new alliances, and heal the bond between them if they want to survive.

There’s no such thing as witches. But there will be.

Cerys is safe in the kingdom of Aloriya. Here there are no droughts, disease, or famine, and peace is everlasting. It has been this way for hundreds of years, since the first king made a bargain with the Lady who ruled the forest that borders the kingdom. But as Aloriya prospered, the woods grew dark, cursed, and forbidden. Cerys knows this all too well: when she was young, she barely escaped as the woods killed her friends and her mother. Now Cerys carries a small bit of the curse—the magic—in her blood, a reminder of the day she lost everything. The most danger she faces now, as a gardener’s daughter, is the annoying fox who stalks the royal gardens and won’t leave her alone.

As a new queen is crowned, however, things long hidden in the woods descend on the kingdom itself. Cerys is forced on the run, her only companions the small fox from the garden, a strange and powerful bear, and the magic in her veins. It’s up to her to find the legendary Lady of the Wilds and beg for a way to save her home. But the road is darker and more dangerous than she knows, and as secrets from the past are uncovered amid the teeth and roots of the forest, it’s going to take everything she has just to survive.

Pray they are hungry.

Kara finds the words in the mysterious bunker that she’s discovered behind a hole in the wall of her uncle’s house. Freshly divorced and living back at home, Kara now becomes obsessed with these cryptic words and starts exploring this peculiar area—only to discover that it holds portals to countless alternate realities. But these places are haunted by creatures that seem to hear thoughts…and the more one fears them, the stronger they become.

D. W. Griffith is a sorcerer, and The Birth of a Nation is a spell that drew upon the darkest thoughts and wishes from the heart of America. Now, rising in power and prominence, the Klan has a plot to unleash Hell on Earth.

Luckily, Maryse Boudreaux has a magic sword and a head full of tales. When she’s not running bootleg whiskey through Prohibition Georgia, she’s fighting monsters she calls « Ku Kluxes. » She’s damn good at it, too. But to confront this ongoing evil, she must journey between worlds to face nightmares made flesh–and her own demons. Together with a foul-mouthed sharpshooter and a Harlem Hellfighter, Maryse sets out to save a world from the hate that would consume it.

Eli isn’t just a teenage girl — she’s a made-thing the witches created to hunt down ghosts in the human world. Trained to kill with her seven magical blades, Eli is a flawless machine, a deadly assassin. But when an assignment goes wrong, Eli starts to question everything she was taught about both worlds, the Coven, and her tyrannical witch-mother.

Worried that she’ll be unmade for her mistake, Eli gets caught up with a group of human and witch renegades, and is given the most difficult and dangerous task in the worlds: capture the Heart of the Coven. With the help of two humans, one motorcycle, and a girl who smells like the sea, Eli is going to get answers — and earn her freedom.

China, December 1941. Having left an unhappy life in England for a teaching post at a missionary school in northern China, Elspeth Kent is now anxious to return home to help the war effort. But as she prepares to leave China, a terrible twist of fate determines a different path for Elspeth, and those in her charge.

Ten-year-old Nancy Plummer has always felt safe at Chefoo School, protected by her British status. But when Japan declares war on Britain and America, Japanese forces take control of the school and the security and comforts Nancy and her friends are used to are replaced by privation, uncertainty and fear. Now the enemy, and separated from their parents, the children look to their teachers – to Miss Kent and her new Girl Guide patrol especially – to provide a sense of unity and safety.

Faced with the relentless challenges of oppression, the school community must rely on their courage, faith and friendships as they pray for liberation – but worse is to come when they are sent to a distant internment camp where even greater uncertainty and danger await…

Scarlett Clark is an exceptional English professor. But she’s even better at getting away with murder.

Every year, she searches for the worst man at Gorman University and plots his well-deserved demise. Thanks to her meticulous planning, she’s avoided drawing attention to herself—but as she’s preparing for her biggest kill yet, the school starts probing into the growing body count on campus. Determined to keep her enemies close, Scarlett insinuates herself into the investigation and charms the woman in charge, Dr. Mina Pierce. Everything’s going according to her master plan…until she loses control with her latest victim, putting her secret life at risk of exposure.

Meanwhile, Gorman student Carly Schiller is just trying to survive her freshman year. Finally free of her emotionally abusive father, all Carly wants is to focus on her studies and fade into the background. Her new roommate has other ideas. Allison Hadley is cool and confident—everything Carly wishes she could be—and the two girls quickly form an intense friendship. So when Allison is sexually assaulted at a party, Carly becomes obsessed with making the attacker pay…and turning her fantasies about revenge into a reality.

Once upon a time, a girl named Sophie rode into the forest with the queen’s huntsman. Her lips were the color of ripe cherries, her skin as soft as new-fallen snow, her hair as dark as midnight. When they stopped to rest, the huntsman took out his knife… and took Sophie’s heart.

It shouldn’t have come as a surprise. Sophie had heard the rumors, the whispers. They said she was too kind and foolish to rule — a waste of a princess. A disaster of a future queen. And Sophie believed them. She believed everything she’d heard about herself, the poisonous words people use to keep girls like Sophie from becoming too powerful, too strong…

With the help of seven mysterious strangers, Sophie manages to survive. But when she realizes that the jealous queen might not be to blame, Sophie must find the courage to face an even more terrifying enemy, proving that even the darkest magic can’t extinguish the fire burning inside every girl, and that kindness is the ultimate form of strength.

Our story begins in 1902, at The Brookhants School for Girls. Flo and Clara, two impressionable students, are obsessed with each other and with a daring young writer named Mary MacLane, the author of a scandalous bestselling memoir. To show their devotion to Mary, the girls establish their own private club and call it The Plain Bad Heroine Society. They meet in secret in a nearby apple orchard, the setting of their wildest happiness and, ultimately, of their macabre deaths. This is where their bodies are later discovered with a copy of Mary’s book splayed beside them, the victims of a swarm of stinging, angry yellow jackets. Less than five years later, The Brookhants School for Girls closes its doors forever—but not before three more people mysteriously die on the property, each in a most troubling way.

Over a century later, the now abandoned and crumbling Brookhants is back in the news when wunderkind writer, Merritt Emmons, publishes a breakout book celebrating the queer, feminist history surrounding the “haunted and cursed” Gilded-Age institution. Her bestselling book inspires a controversial horror film adaptation starring celebrity actor and lesbian it girl Harper Harper playing the ill-fated heroine Flo, opposite B-list actress and former child star Audrey Wells as Clara. But as Brookhants opens its gates once again, and our three modern heroines arrive on set to begin filming, past and present become grimly entangled—or perhaps just grimly exploited—and soon it’s impossible to tell where the curse leaves off and Hollywood begins.

The story of Troy speaks to all of us – the kidnapping of Helen, a queen celebrated for her beauty, sees the Greeks launch a thousand ships against the city of Troy, to which they will lay siege for ten whole years. It is a terrible war with casualties on all sides as well as strained relations between allies, whose consequences become tragedies.

1912: Ava Knight, a teen heiress, boards the Titanic to escape the shadow of her unstable mother and to fulfill her dream of becoming a photographer in New York. During the journey she meets three people who will change her life: a handsome sailor, a soldier in the secret Black Hand society that will trigger World War I, and a woman with clairvoyant abilities. When disaster strikes the ship, family betrayals come to light.

2010: When Taylor Romano arrives in Oxford for a summer journalism program, something feels off. Not only is she greeted by a young, Rolls Royce-driving chauffeur, but he invites her to tea with Lady Mae Knight of Meadowbrook Manor, an old house with a cursed history going back to the days of Henry VIII. Lady Knight seems to know a strange amount about Taylor and her family problems, but before Taylor can learn more, the elderly woman dies, leaving as the only clue an old diary. With the help of the diary, a brooding chauffeur, and some historical sleuthing, Taylor must uncover the link between Ava’s past and her own…

Despite her world of privilege, Hélène is inspired early on by the radical ideas of her progressive governess. Though her family tries to intervene, the seeds of revolution have already been planted in Hélène’s heart, as are the seeds of love from an unlikely friendship with a young jeweler’s apprentice. Hélène’s determination to find true love is as revolutionary as her attempt to unravel the truth behind a chilling set of eye-shaped brooches and the concealed murder that tore her family apart.

As violence erupts in Paris, Hélène is forced into hiding with her estranged family, where the tangled secrets of their past become entwined with her own. When she finally returns to the blood-stained streets of Paris, she finds everything-and everyone-very much changed. In a city where alliances shift overnight, no one knows who to trust.

Faced with looming war, the mystery of her family’s past, and the man she loves near death, Hélène will soon will find out if doing one wrong thing will make everything right, or if it will simply push her closer to the guillotine. 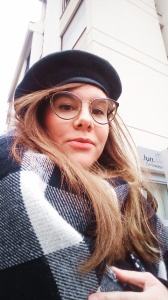